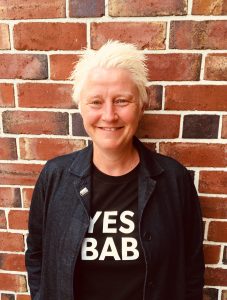 I’m an independent theatre producer based in Birmingham. Hailing originally from Ilkeston in Derbyshire, I studied Theatre Design at Birmingham Polytechnic, now Birmingham City University. I worked for several years as a freelance designer and workshop leader mainly in community and education settings, before gradually shifting into work as a producer and arts manager. In 2014, I set up my own company, Outer Circle Arts through which I manage my work with companies and artists here in the UK and in Spain. Have a look around the website for more information about current and past projects with companies and artists such as Sleepwalk Collective, Paul O’Donnell Altered Skin and Little Soldier.

I’m also on the board of the ITC, the management association for the independent theatre sector.

When I’m not working, you’re likely to find me in my garden with my chickens, tending my allotment or out and about on my bike or climbing the hills and mountains of Wales and Spain.

Some other companies and organisations I’ve worked with:

The Play House theatre in education, General Manager – one of the best known and longest running TiE companies in the UK. Based at Birmingham Rep, the company’s unique approach has meaningful participation at the heart of everything it does.

Creative Black Country – one of a team of arts co-ordinators working with community groups across the Black Country as part of Arts Council England’s Creative People and Places initiative.